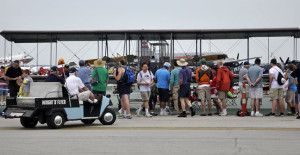 UPDATE June 18, 2015: A maintenance issue has forced Wright “B” Flyer to cancel its participation in the air show.

DAYTON, Ohio—Wright “B” Flyer Inc. will bring history to life this weekend at the Vectren Dayton Air Show Presented by Kroger with flybys of its one-of-a-kind lookalike of the Wright brothers’ first factory-built airplane.

The Wright “B” Flyer is a symbol of Dayton’s aviation heritage because the original Model B was produced in Dayton, where Wilbur and Orville Wright lived and invented the airplane. The Wright brothers formed the Wright Company in 1909 and produced approximately 120 airplanes in its West Dayton factory. The “B” was its first and most popular model.

The original Wright factory buildings—the first in America built for the purpose of manufacturing airplanes—are about to become active again.

Later this year, Wright “B” Flyer will begin building its next Model B lookalike at the factory site. The all-volunteer, 501(c)(3) nonprofit is raising funds for the project to build a successor to the current airplane, which has been flying since 1982. Most construction will take place in an adjoining building, but final assembly is to be accomplished in one of the original buildings.

The National Aviation Heritage Alliance (NAHA) and the Experimental Aircraft Association (EAA) are supporting the effort. NAHA is developing a workspace for the project at the factory site. EAA, a worldwide association of aviation enthusiasts based in Oshkosh, Wis., is helping Wright “B” Flyer recruit volunteers to help build parts for the airplane.

NAHA is a nonprofit organization designated by Congress to manage an eight-county area of southwestern Ohio known as the National Aviation Heritage Area. It’s one of 49 National Heritage Areas across the United States and the only one dedicated to aviation heritage. Wright “B” Flyer and the United States Air and Trade Show Inc., the air show’s governing body, are among the 16 heritage partners NAHA represents.

The Vectren Dayton Air Show is one of America’s top annual aviation events. This year’s headliner act will be the U.S. Air Force Thunderbirds. Joining them will be the U.S. Navy F-18 Super Hornet, U.S. Army Golden Knights and a U.S. Coast Guard search and rescue (SAR) demonstration. Making its first appearance in Dayton will be the Breitling Jet Team from Dijon, France, on its first North American Tour.

Discount general admission tickets are on sale at area Kroger Stores. The Greater Dayton RTA is offering Park & Ride express shuttle service from the National Museum of the U.S. Air Force. Gates are open 9 a.m. to 6 p.m. The feature show takes place from 11:30 a.m. to 4 p.m.