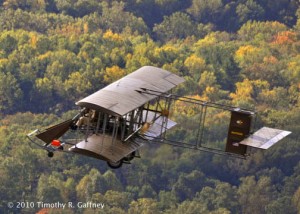 The project to build No. 001, Brown Bird, was the genesis of Wright “B” Flyer Inc.

In 1973, a number of air-minded individuals at Wright-Patterson Air Force Base decided to built a flyable lookalike of the Wright brothers’ first production aircraft. The project was launched in 1975.

Research revealed that detailed construction drawings of the original Wright B Military Flyer did not exist, so the planners decided to use the non-flying, highly modified Model B in the Air Force Museum as a template. Important modifications to this airplane included ailerons instead of wing warping and a control wheel instead of the original control levers.

Modern engineering and materials were used to design and build an airplane that would look like a Model B but meet modern airworthiness standards. The result was a robust aircraft with a steel structure and a modern aircraft engine. Its empty weight is 3,400 lbs., compared to the 1,400 pound loaded weight of the machine on which it’s based.

Volunteers nicknamed it the “Iron Bird.” The airplane’s surfaces are painted brown. With the acquisition of the Valentine Flyer with its yellowed surfaces, volunteers have taken to calling No. 001 the “Brown Bird.” (No. 001 apparently was painted brown because the surfaces of the museum’s airplane are dark, and it has been referred to as a lookalike of a Wright military flyer. But the museum does not identify its airplane as a military aircraft, and the Wright airplanes sold to the military were not painted.)