Off we go… into the wild blue yonder (1) 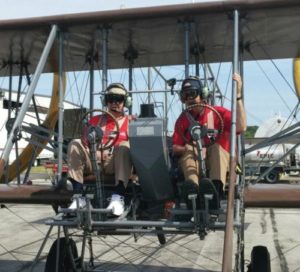 My grandchildren think I was with Orville and Wilbur Wright at Kitty Hawk, or at least worked in their bicycle shop back home in Dayton. I am old, but not that old … yet young enough to want to do a few things yet in life before I join the brothers Wright in the wild blue yonder. One of those things occurred on the first Saturday in August when my kids gave me one of those birthday gifts you dream about: A membership in Wright B Flyer, Inc., and the ride of a life-time in the modern look alike of the Wright brothers’ first production airplane.

As a newcomer to the area in Bellbrook, I assume that many or most of you long-time residents know all about the B Flyer. Better still, this weekend or next, or whenever you are looking for something special to do, drive over to their museum-hangar at 10550 North Springboro Pike at the Dayton-Wright Brothers Airport. Admission is free.

There you will not only meet the B Flyer in a huge well-maintained hangar/workspace, but also the most caring group of volunteers you’ll ever experience. Some thirty men and women whom, it became obvious, care about people as much as they love the preservation of the history of flight as written by the brothers Wright. Together, they keep the museum running and open 9 a.m. to 2:30 p.m. Tuesday, Thursday and Saturday.

When we arrived Saturday morning with my family in tow, we were warmly greeted and introduced to a volunteer (Marilyn) who signed me in, had me sign the usual perfunctory paperwork that accompanies all such activity, and then accompanied by another volunteer (Kim), were ushered out into the hangar with its great doors opened to the East, framing the B Flyer which had just landed and taxi’d back to off-load another guest ‘co-pilot.’

My 11 a.m. flight would follow three others I was told, most of whom were ‘walk-ins’ that morning. Each time the Flyer returned to the hangar area, volunteers scurried about, assisting an intrepid flyer down a small portable steel ladder from plane to earth, then beckoning to the next anxious rider. Within minutes, the dual-propellered B Flyer with its 225 hp engine revved up and the plane taxi’d forth out toward the run-way. The whole volunteer operation worked like clockwork (inappropriate to suggest like the proverbial railroad, but that too).

A small boy de-planed first, later a young man from the next flight, followed by a middle-aged gentlemen. Moments later, volunteer Kim called my name, introduced me to Bill, who walked me a short distance near the B Flyer as the final ‘flyer’ climbed down the ladder. Now it was the old geezer’s turn. For fellow senior citizens who wonder about making such a flight or families thinking about giving a gift membership and flight to an older recipient, let me assure you that if this 83-year old with a pacemaker, funny breathing, and ouchy joints can do it, so can you. Every safety precaution is taken to make you feel safe and secure.

Bill climbed the ladder behind me then securely strapped me into place beneath a heavy-duty chest-seat belt. Off came the glasses and in their place, a comfortable set of goggles; after which Rich Stepler, the organization’s senior pilot, topped me off with a headset with microphone and earphones. I liked that because first, I’m a talker (an old radio guy) and secondly, I wanted to know as much as I could about the plane and our imminent flight.

We taxied slowly toward the south end of the 5,000 foot runway that the B Flyer shares with business air traffic at other times, while chatting about the Flyer’s horsepower and other things until Rich said as we powered up for the take-off: “Gonna get noisy now, talk to you when we land” (giving my wife a brand new line to use in the future when I get a little windy). Above, the sky was cloudy, the thermometer in the early 80’s, the breeze light at 7 mph. Below, the runway, stretched before us, black and long … and the adenalin kicked in.

Now, we were off down the runway and gaining speed. It seemed like perhaps nearly half the run-way to an ultimate speed of about 50 mph, and then sud 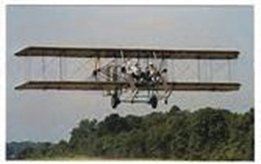 denly we were airborne, climbing quickly to about 75 feet. On paper that doesn’t sound like anything at all, but in the Spartan openness of the craft, it looks like a helluva long way down there. The cross-wind (breeze) caused the B Flyer to undulate much more than I expected; enough to make me really sense and feel what the Wright brothers must have experienced in their early experimental flights as they battled far stronger ocean winds at Kitty Hawk in a much lighter aircraft. But, Stepler controlled it beautifully.

Then just as quickly, we began

Our descent after perhaps a 15-20 second flight (which seemed considerably longer), touched down smoothly near the cross-over taxi-way, hung a left, and casually taxi’d back to the hangar. This time, Rich didn’t have to tell me to be quiet. It wasn’t that my heart was in my mouth. It was simply: Wow! What a thrill. What a very special embrace with history.

For a few fleeting moments, I was at Kitty Hawk, experiencing the fragile, capricious flight of a man-made machine that was never supposed to free itself from earth’s grip. No, that’s for the birds most said, and merely the dream of two bicycle shop owners from Dayton, Ohio. Today, mankind, fresh back from the Moon, is circling Pluto, with Mars in sight … and I had my own dream fulfilled.

Wright Brothers B-Flyer, Inc. offers three different memberships. The Honorary Aviator membership which the author was given is $100 and includes the orientation flight.

Mel Grossman is a local resident and guest columnist.